FARMINGTON, ME  (February 22, 2021)—University of Maine at Farmington students, faculty and staff came together this past October to create their regular fall theatrical production in an anything but regular year.

However, UMF cast and crew members, most of them students, were committed to creating a meaningful and thought-provoking production, in accordance with CDC guidelines, that the public could still appreciate and enjoy remotely. 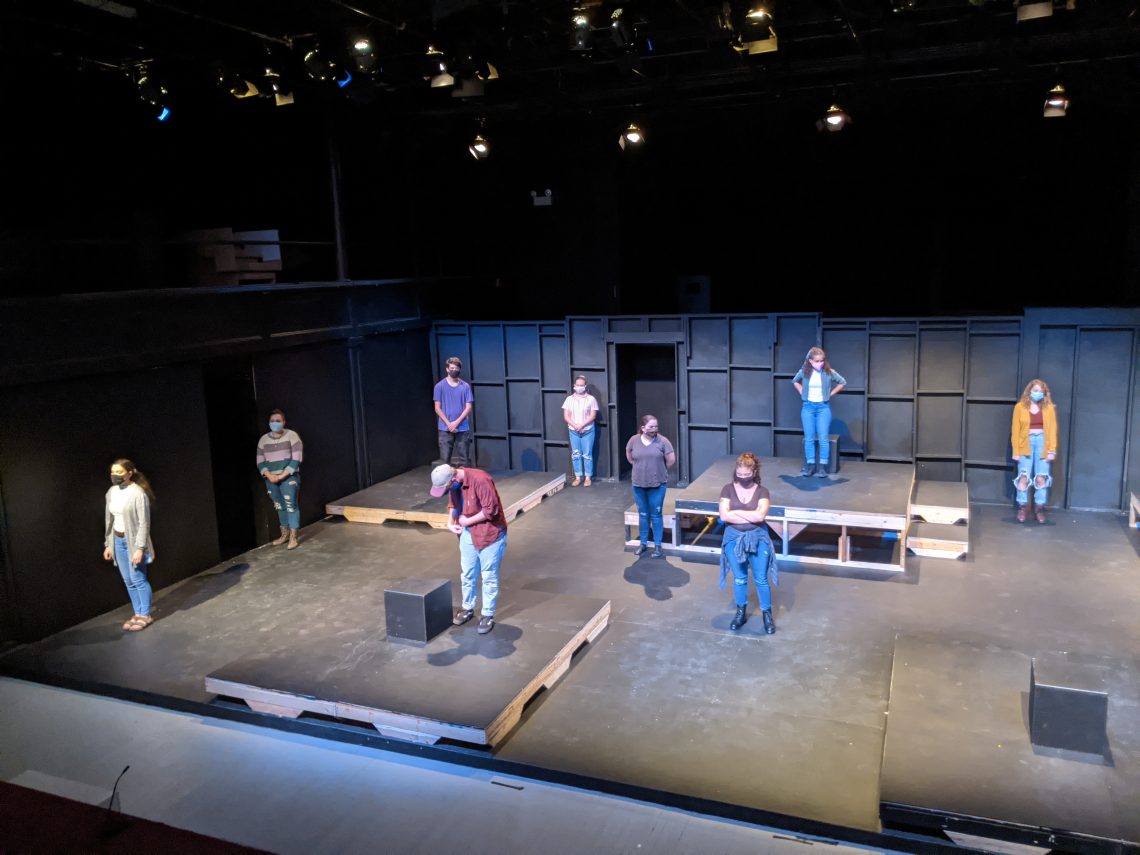 “Good Trouble,” an all-original, performance work created by a Theatre UMF ensemble cast was inspired by the words and work of the late Congressman John Lewis.

“Everything is so restricted right now due to COVID, it was nice to still have this performance to continue creating and feel like there’s an impact being made with art. I think that’s important, too, because art is not only a gateway, but it is comforting during these strange times,” said Ciera Miller, UMF senior from Lisbon Falls and script writer.

“Good Trouble,” an all-original, performance work created by a Theatre UMF ensemble cast was inspired by the words and work of the late Congressman John Lewis, “Get in good trouble, necessary trouble and help redeem the soul of America.”

“Part of online performance is basically relearning certain aspects of acting such as projection and connection with your fellow actor through masks and social distancing,” said Em Remington, UMF junior from Bennington, Vermont. “We had to adapt to keep each other safe, something that makes you appreciate what you’re passionate about even more as well as your theatre community.”

John Lewis knew what trouble was, a civil rights activist and leader all his adult life. He was one of the 13 original Freedom Riders, a group of black and white activists who rode on interstate buses to challenge segregation policies.

In 1963, he was one of the “Big Six” leaders who organized the march on Washington D.C.  He also led the first of three marches across the Edmund Pettus Bridge from Selma to Montgomery, Alabama, in 1965, to help end legalized racial segregation. Known as Bloody Sunday, that event was marred by police brutality where marchers, including Lewis, were attacked.

Throughout his life his courage and commitment to nonviolence and reconciliation helped him emerge as a leader in the movement for equal justice. On seeking truth, justice and equality, Lewis said, “When you see something that is not right, not fair, not just, you have to speak up. You have to say something; you have to do something.”

“Theatre can be a powerful force, often a mirror to its time or a reckoning with history,” said Jayne Decker, director.  “Sometimes the stage creates a story of place and its people, a play of ideas, an attempt to understand, to challenge or provoke, and sometimes we stand on the stage of common ground in compassion and understanding.  We learn as we go.”

Without the opportunity of an in-person performance due to the Covid-19 pandemic, this production was recorded by students and is available for public viewing on the UMF Mantor Library ScholarWorks website at: https://scholarworks.umf.maine.edu/performing_arts/1.

This Theatre UMF production is sponsored by the UMF Division of the Arts.