FARMINGTON, ME  (September 23, 2022)—University of Maine at Farmington proudly announces that Professor of Music Steven Pane will perform Missy Mazzoli’s “Orizzonte” for solo piano electronics and Beethoven’s Sonata No 23 in F minor, Opus 57 “Appassionata.” Performances will take place in Nordica Auditorium in Merrill Hall on the UMF campus on Tuesday, Oct. 4 at 6 p.m., with a repeat performance on Wednesday, Oct. 5, at 11:45 a.m. 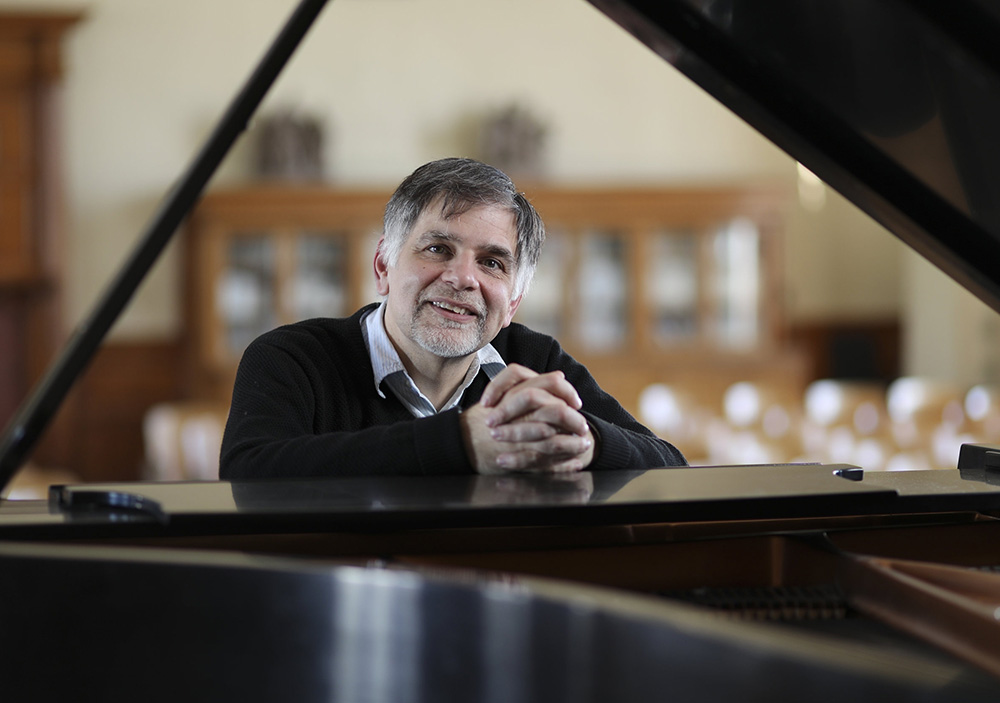 The concerts are free and open to the public. Each hour-long event will feature a talk by Pane. The performance will be followed by a question and answer time.

Along with the Third and Fifth Symphony, the Appassionata (1804-5) remains one the most well-known pieces of Beethoven’s middle or heroic period. The sonata offers a dramatic emotional range as it pushes the technical limits of the instrument and the performer.

Mazzoli’s Orizzonte, (2005) for piano and electronics, consists of gently overlapping sinewaves that set the stage for a meditative and introspective piano melody. This piece was composed for Hills Not Skyscrapers, a band devoted to combining live electronics, composition and improvisation, founded by Missy Mazzoli in Amsterdam in 2004.

The sinewaves were created using SuperCollider software. Orizzonte (“horizons” in Italian) was first performed on a piano that had been left out in the rain for a year, in a dilapidated squat hidden in the heart of Amsterdam.

Missy Mazzoli was recently deemed “one of the more consistently inventive, surprising composers now working in New York” (The New York Times) and “Brooklyn’s post-millennial Mozart” (Time Out New York) and has been praised for her “apocalyptic imagination” (Alex Ross, The New Yorker).

Mazzoli is the Mead Composer-in-Residence at the Chicago Symphony Orchestra, and her music has been performed all over the world. In 2018, she made history when she became one of the two first women (along with composer Jeanine Tesori) to be commissioned by the Metropolitan Opera.

Pane’s career as a pianist and conductor emerges out of his life-long interest in the interdisciplinary study and performance of music. At UMF his work often involves collaborations such as “Remnants,” a series of short films by Ann Bartges, inspired by J. S. Bach’s Goldberg Variations; “Lyric Time: Chopin’s Ballades and John Keats’ Odes”with poet Kristen Case; and Celestial Emporium with poet Jeff Thompson and artist Dawn Nye.

Pane gave the American premier of Ana-Maria Avram’s Musique pour Mallarme, at Harvard and UMF in 2010, and shares Avram and her partner Iancu Dumitrescu’s interest in phenomenology and music. Dr. Pane has performed at universities and in major halls throughout the country including the Academy of Music in Philadelphia, Aaron Davis Hall in New York City, Davies Hall in San Francisco, and the Kennedy Center for the Performing Arts.