Researching. Interning. Learning. Creating. Teaching. They’re all part of the wondrous process of becoming at UMF. And they make for some good stories, too. Ryan Mastrangelo, director of marketing and communications, captures vignettes of the student experience for the @umainefarmington Instagram account to provide prospective applicants with vivid glimpses of life at Farmington. If you’re wondering just what UMF students are up to these days, follow along on Instagram — or look to this monthly feature, where Mastrangelo documents student endeavors that illustrate the breadth and power of a UMF education.

By designing his own major at UMF, Malloy ’20 puts himself on track to become a doctor of physical therapy 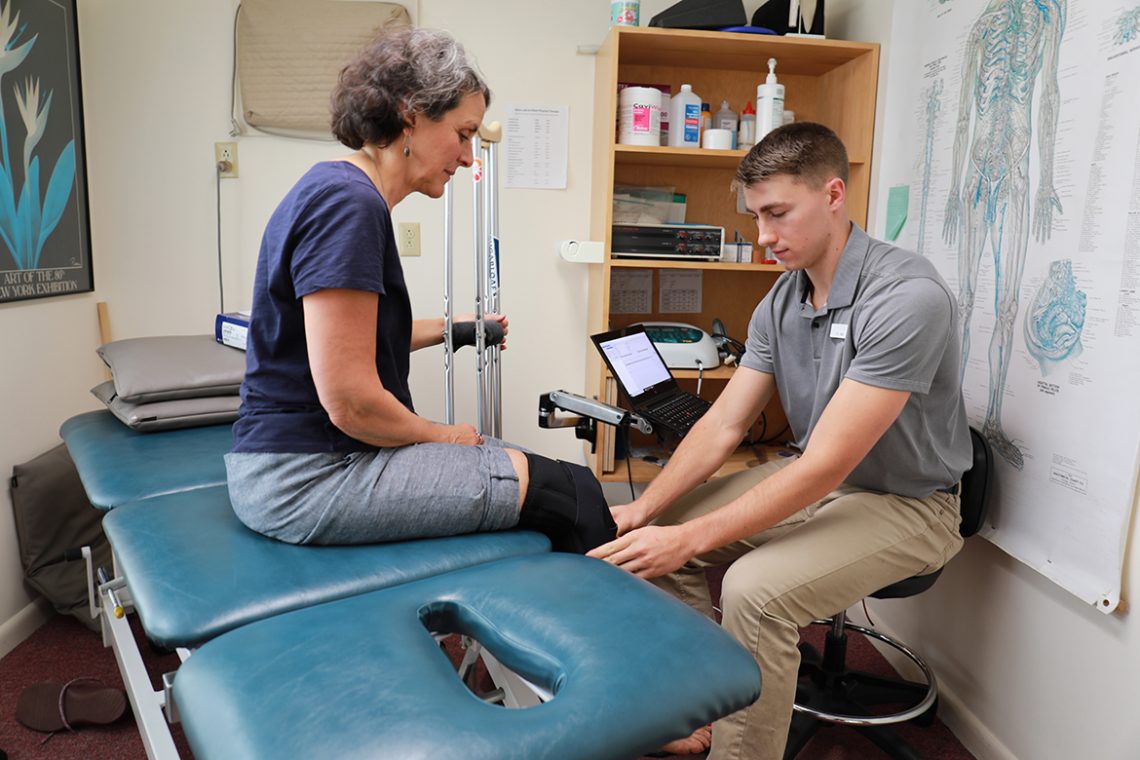 Chase Malloy ’20 of Madison, Maine, (above right) began his academic career at UMF as a biology major on the pre-med track. But during his junior year, after interning at Allied Physical Therapy in Farmington, he decided to create a self-designed Pre-Physical Therapy track major for himself that includes courses in biology, community health, and rehabilitation.

The year-long internship experience, says, Malloy, “reassured me that physical therapy is the career I want to pursue, and it provided me with a great experience for graduate school applications.” 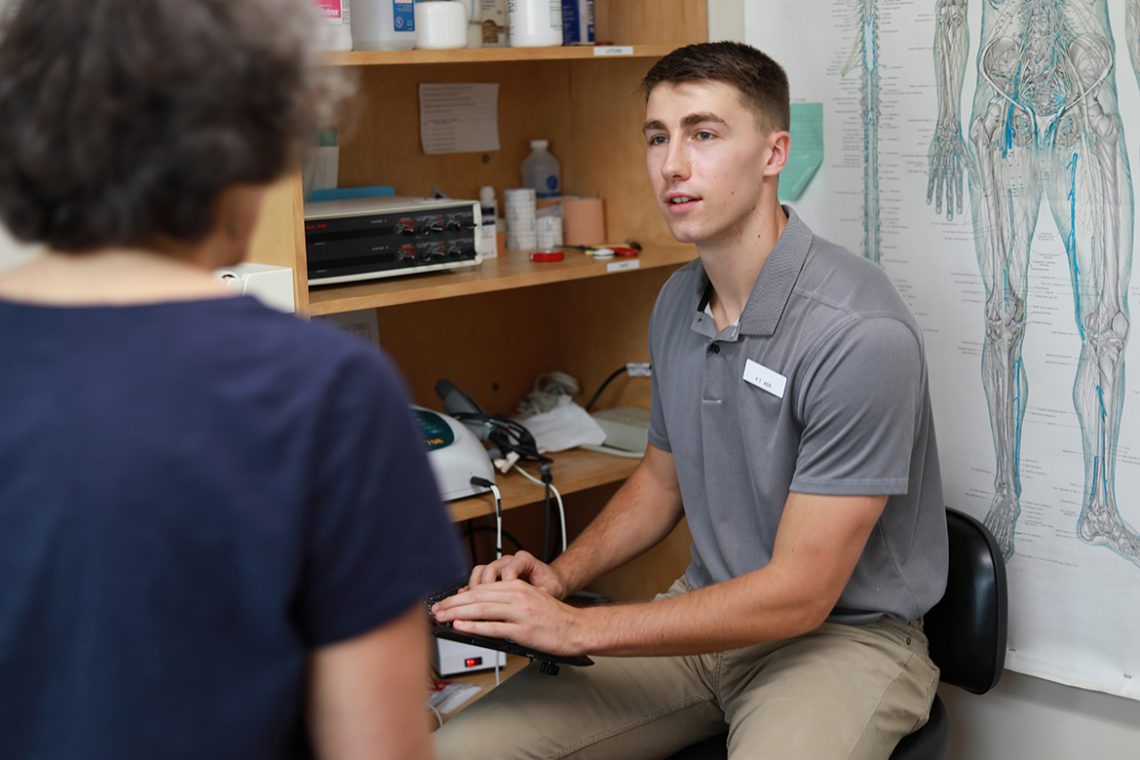 Stephanie Flanagan, office manager and co-founder of Allied Physical Therapy, says she and her husband, Dennis — the long-standing practice’s lead PT — have employed UMF interns for more than 20 years.

“We’ve watched many of them go on to physical therapy, occupational therapy, and physician’s assistant programs,” says Flanagan, pictured above with Malloy.

Flanagan says that Chase and other UMF interns play a “strong role in assisting our providers and office staff, keeping us on time and moving forward,” and in return, “they gain knowledge and experience that helps propel them to their next step.” 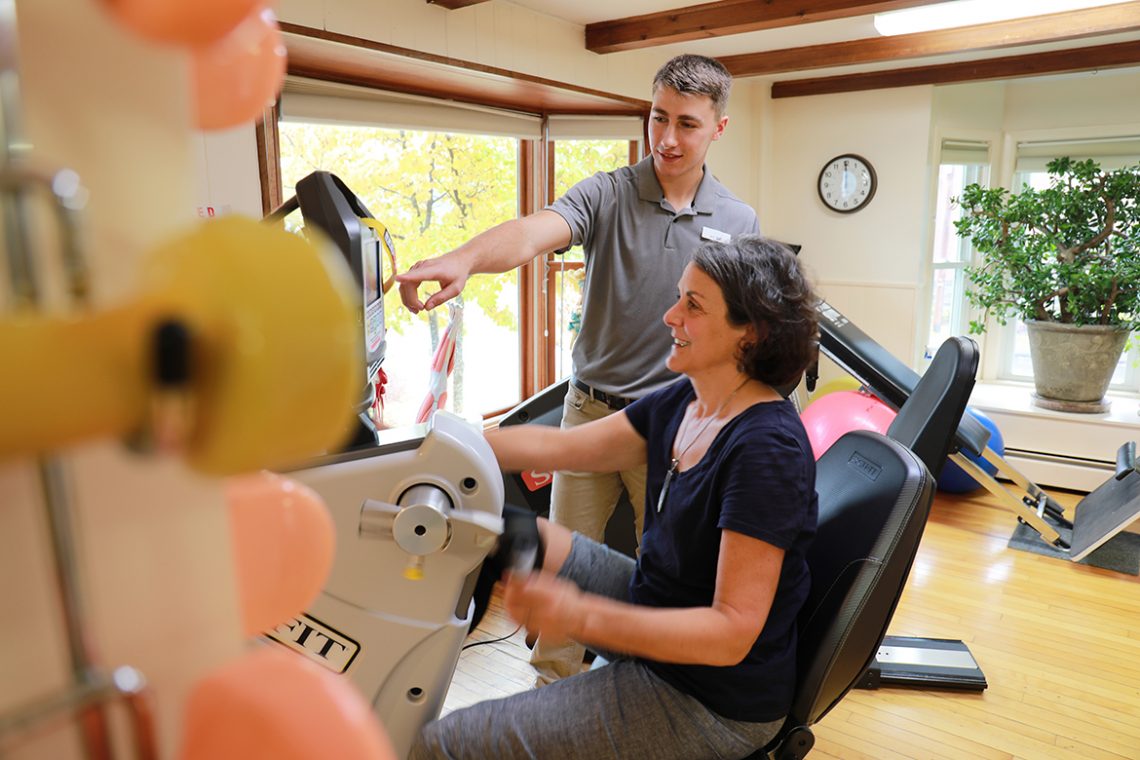 Malloy, who has already applied to several Doctor of Physical Therapy programs across New England, says he plans to matriculate directly after graduating from UMF this spring. 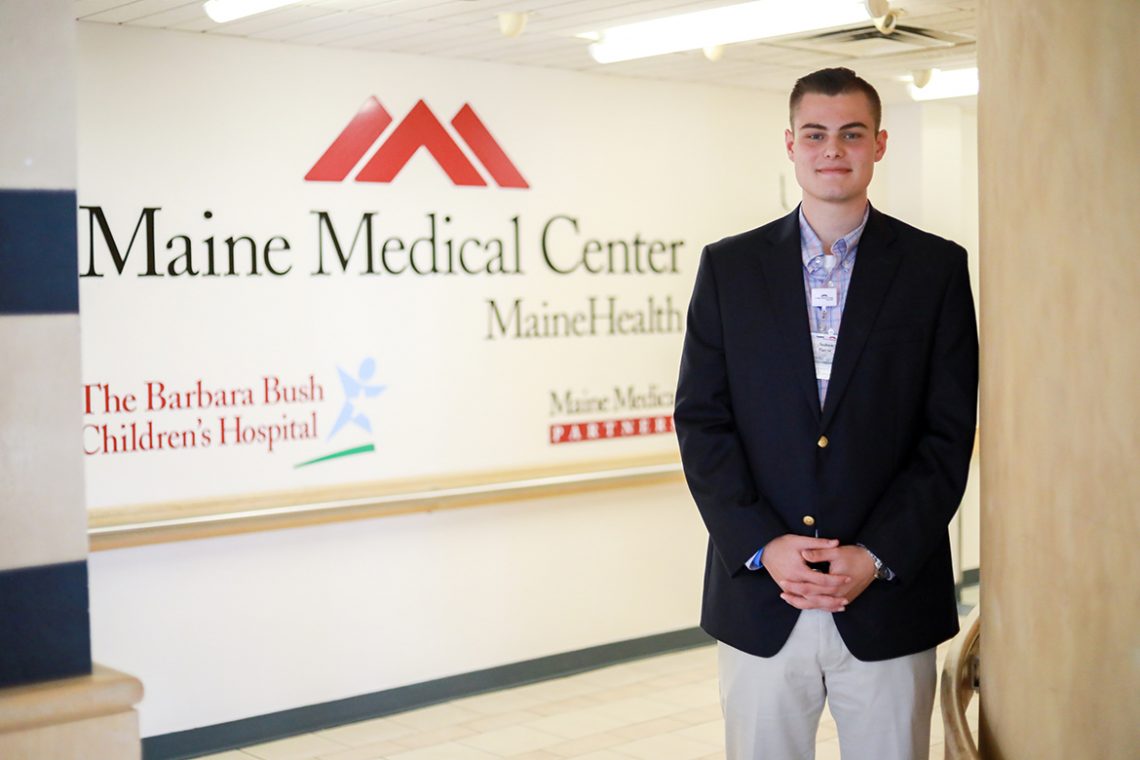 Psychology major Andrew Parent ’21 of Scarborough, Maine, spent summer 2019 interning with Maine Medical Center’s Patient Experience Team. Of the more than 1,400 applications received for positions at MMC, Parent’s was among the 6 percent that made the cut. He spent the last three months as a mentor to junior volunteers, conducting staff interviews, planning events, presenting KPIs (key performance indicators), and rounding with nurses to check on patients and families regarding their stays at MMC. As for his own key performance indicator, Parent was named MMC’s July Employee of the Month.

“My role at the hospital involved me with numerous departments all over the hospital. Making connections with people is something UMF’s small campus — the ease with which you get to know staff and faculty — taught me how to do,” says Parent. “Being in a hospital is rarely a fun time in someone’s life. As a psychology major and working with patients, this experience has allowed me to develop a deeper compassion towards patients and their family members during difficult times.”

Parent is now back on campus, but his legacy at Maine Medical Center, if implemented, could save the hospital tens of thousands of dollars.

“The hospital often has to reimburse patients for their lost items,” he explains. “One day while my boss and I were walking down the hall, I made a comment about creating a KPI revolved around lost belongings. Realizing that the need was there, we presented the idea to the Operational Excellence Team (they are in charge of the KPIs) who agreed it was a great idea. The implementation process takes a lot of time, so assuming it gets implemented, it’ll include the unit with the most reported lost belongings, save the hospital a lot of money, while also better serving its patients and families.” 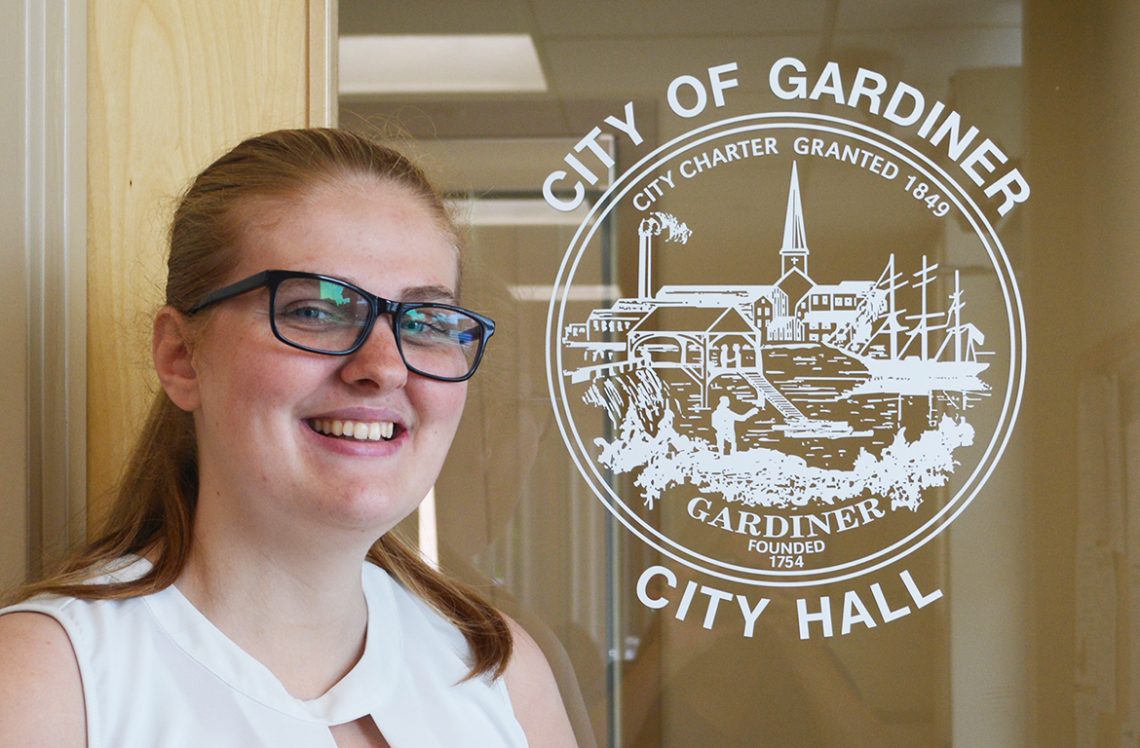 The City of Gardiner needed a digital inventory of its sewer and stormwater systems to better understand current resources and system maintenance. Enter Natalie Thomsen ’21, a business economics major with minors in legal studies and geography, who is interning with Gardiner’s Department of Public Works through the Maine State Government Summer Internship Program. Thomsen is putting her knowledge of GIS to work by creating a digital map that accurately accounts for the city’s storm and wastewater assets.

“We at the City have been working for some time to generate a usable and reliable GIS map system to identify our sewer and storm water collection systems as a whole,” said Tony LaPlante, the Gardiner’s director of public works. “Natalie has done a wonderful job tying all the information we have collected into a user-friendly tool that the City staff will be able to utilize.”

For Thomsen, who received the 2019 Sumner P. and Flora A.P. Mills Community Service Award for giving more than 85 hours of community service to several local organizations this year, the interest in serving the City of Gardiner comes naturally.

“I have always been interested in community service and leading by example,” says Thomsen. “This internship helps me pursue my career goals while performing a valuable service for the Gardiner community.” 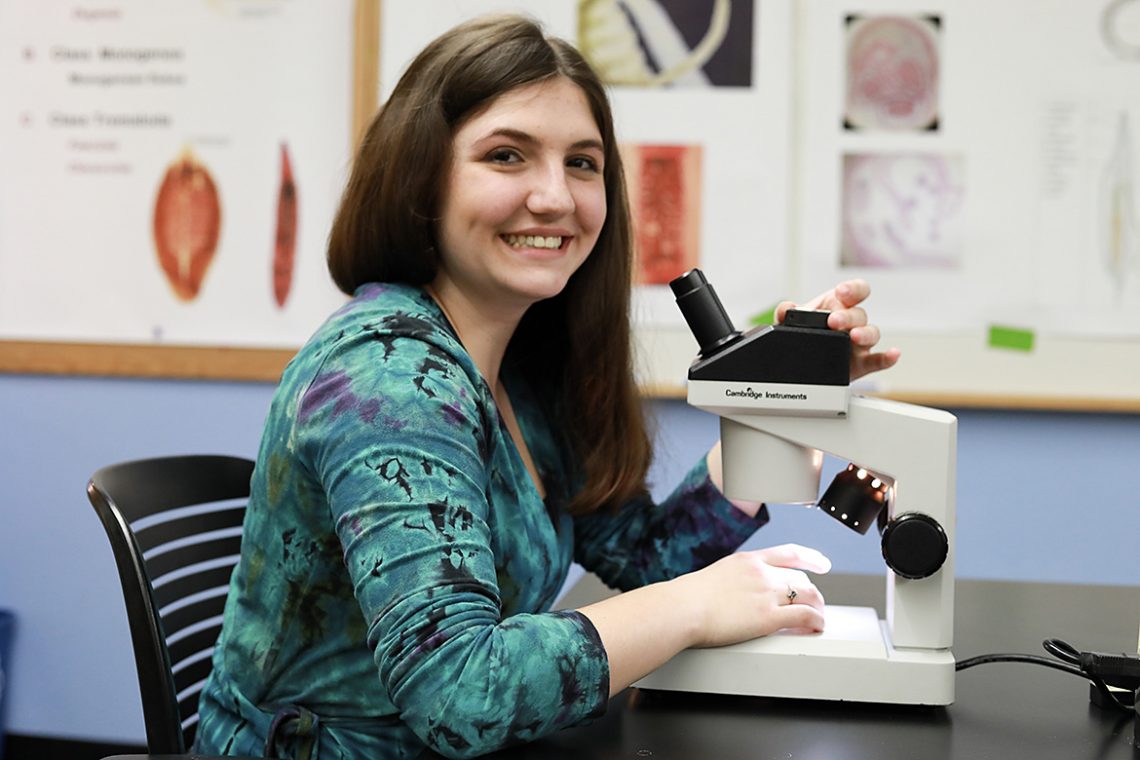 Portia Hardy ’22 of Winthrop, Maine, spent her March spring break at the Mount Desert Island Biological Lab in Bar Harbor, attending a short course in genome engineering. Hardy and six other UMF students learned new gene editing techniques using a new tool that allows researchers to change a specific gene in an organism in order to determine its function.

“I was able to see firsthand what it would be like to have a job in a lab,” says the earth and environmental sciences major. “We were able to use really wonderful microscopes which I wouldn’t have had access to otherwise.”