UMF Among the Top 10 in Four “Best College” Categories

The University of Maine at Farmington, the birthplace of public higher education in Maine, has once again been nationally recognized as a “Best College” by U.S. News and World Report, ranking among the top 10 in four categories in its Carnegie classification of Regional Colleges in the North. 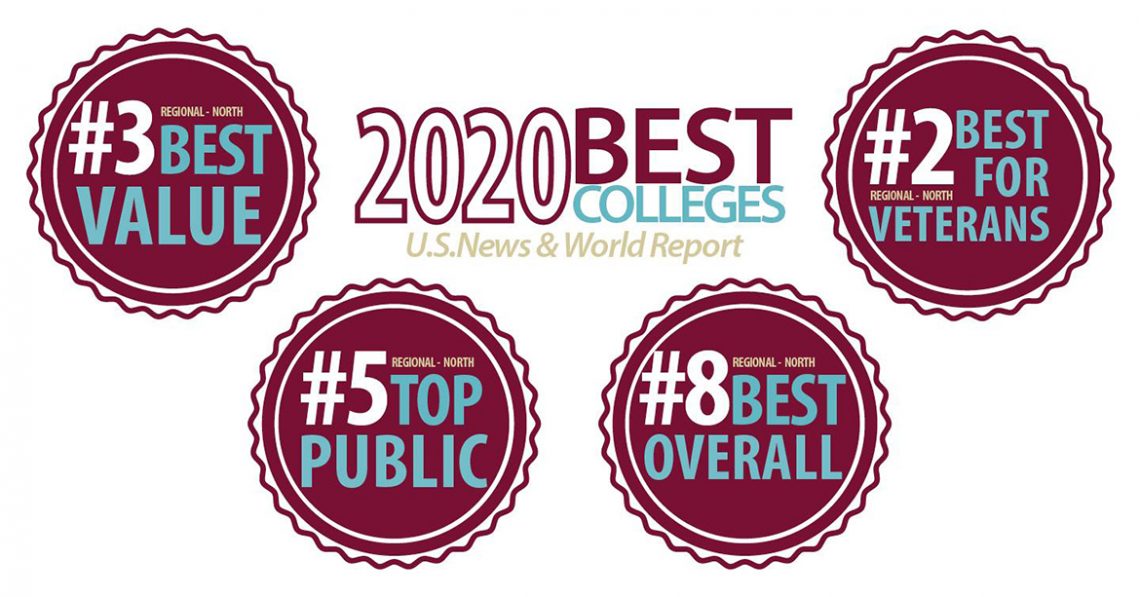 The 2020 U.S. News Best Colleges ranks UMF as No. 2 among Best Colleges for Veterans, No. 3 among those cited as a Best Value college, No. 5 among Top Public Colleges, and No. 8 among Top Regional Colleges in the North — Public and Private. (Graphic by Ryan Mastrangelo.)

UMF is also ranked No. 11 in a distinct new category this year that ranks Top Performers on Social Mobility. This category measures the graduation success of students receiving Pell Grants and recognizes how well schools graduated students coming from households with incomes less than $50,000 annually.

“We are thrilled that UMF continues to be nationally recognized among the top public colleges for quality and affordability,” said President Edward Serna. “Our mission has always been to provide opportunity to educational excellence for our students from Maine and beyond. These rankings are more than an annual benchmark, they are a reflection of what everyone at UMF continually strives for every day — our students’ success.”

The Best Value schools were determined by taking into account a school’s academic quality and the net cost of attendance for a student who received the average level of need-based financial aid. According to U.S. News, the higher the quality of the program and the lower the cost, the better the deal.

The Best Schools for Veterans category was created to provide military veterans and active-duty service members with data on which top-ranked schools offer benefits that can help make a college education more affordable to veterans. To be included in this ranking schools must be certified for the GI Bill, participate in the Yellow Ribbon Program (or be a public school that charges in-state tuition to all out-of-state veterans), enroll a minimum of 20 veterans and active service members, and be in the top half of its ranking category.

This year’s U.S. News college guide ranked nearly 1,400 regionally accredited institutions throughout the United States. Colleges were grouped into categories based on the Carnegie Classification of Institutions of Higher Education, the most widely accepted classification system in U.S. higher education.

UMF was also named a “Best Bang for the Buck” college this year by Washington Monthly. UMF was ranked sixth out of 200 Top Bachelor’s Colleges in the U.S. by Washington Monthly for excellence in contributions to the public good. This is the 10th year in a row UMF has been recognized by Washington Monthly as a smart, well-run college that helps students earn a high-quality diploma at an affordable price while instilling in them a sense of service. And UMF is the only Maine college in the top 18 institutions in this category.

For Accepted Students - What are your next steps?