Does my liberal arts degree have value in the job market? How do I set myself apart in the applicant pool? I know how to succeed with schoolwork, but how, exactly, do I succeed at work work?

These can be big, existential questions for college students, especially those who may have found an academic identity — through an intellectually satisfying, good-fit major — but aren’t quite sure about what comes after Commencement.

To help answer students’ questions and calibrate them for success in the workplace, Center for Student Development career counselors Steve Davis and Cyndi McShane ’07 invite alumni panelists to share pro-tips and advice at the College to Career Symposium, which, in recent years, has been held annually in April. 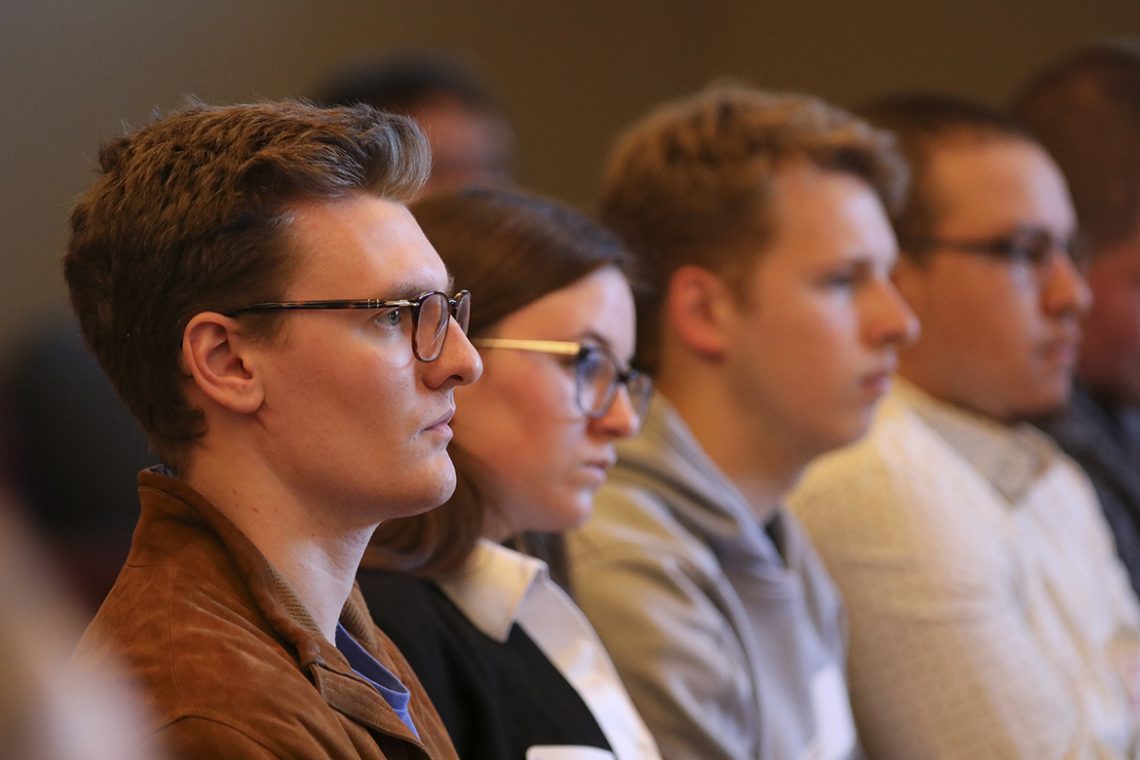 The 60 students attending the 2019 College to Career Symposium took in the sage advice with rapt attention.

With respect, encouragement, and appropriate doses of anxiety-allaying humor, all shared pearls of work-forged wisdom with an audience of 60 students on Wednesday, April 11. Here are some highlights of what they had to say.

On the importance of developing and maintaining good relationships at work:

Andrew: “I’ve approached every interaction that I’ve had as a chance to develop a strong relationship. At the end of the day, these people ended up putting my name in front of other folks who were looking for a CEO, and they recommended me. So, I would say, wherever you are, and especially wherever you’re starting your career, treat every relationship you have with a lot of respect. You never know what that interaction can turn into down the road.” 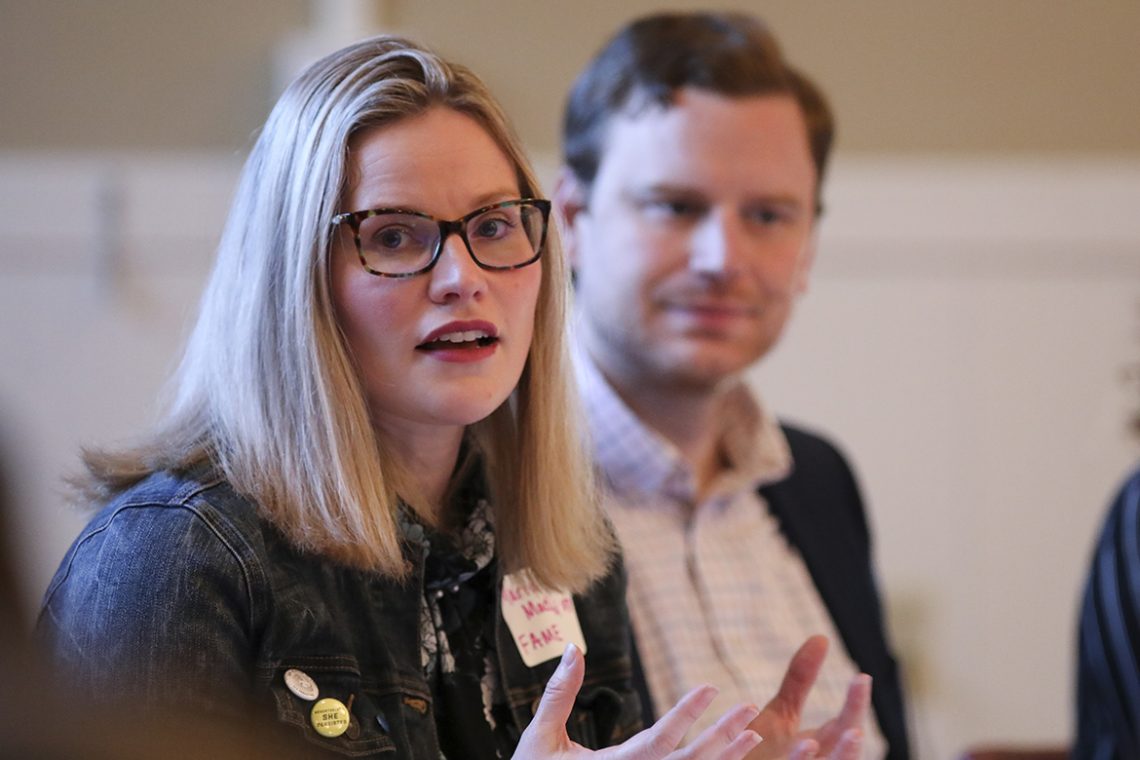 Maria: “I think we’ve all been in a situation where there’s gossip being shared. Participating in that in the workplace really sets you apart in a negative way. So, I recommend being cognizant of your integrity and making sure you understand that you’re there to do a job. Make sure that your social media and your face-to-face persona demonstrate who you really want people to see and what your character is. If you’re in the presence of gossip, you may need to close your door at times to make sure that you keep yourself removed from it. Because when everything blows up, which it almost always does in those situations, you won’t be in the path of that fallout.”

Morgan: “I’m a big believer in taking the initiative with people. Where I work is basically a set of offices around a communal work space, and one of Senator King’s representatives occasionally works in that common space when he’s in the area. So shortly after I started my job, he came in to do some work and I thought to myself, ‘I should get up from my desk and go shake hands with this guy.’ He’s become a great mentor of mine, and he has been a huge advocate for the way my job has progressed and the promotions I’ve gotten within the organization. And he’s also a reference on my resume.”

On the value of the liberal arts degree in the workplace:

Brian: “In whatever you wind up doing for work, you will be required to learn new things. It’s interesting. It’s engaging. And by learning new things you’re going to keep your mind sharper at work. This, by the way, is actually fun. And who doesn’t want to have fun at work? That’s the beauty of liberal arts. It gives you that ability to make these connections that somebody else isn’t necessarily going to make. And when you make those connections, that’s what sets you apart.” 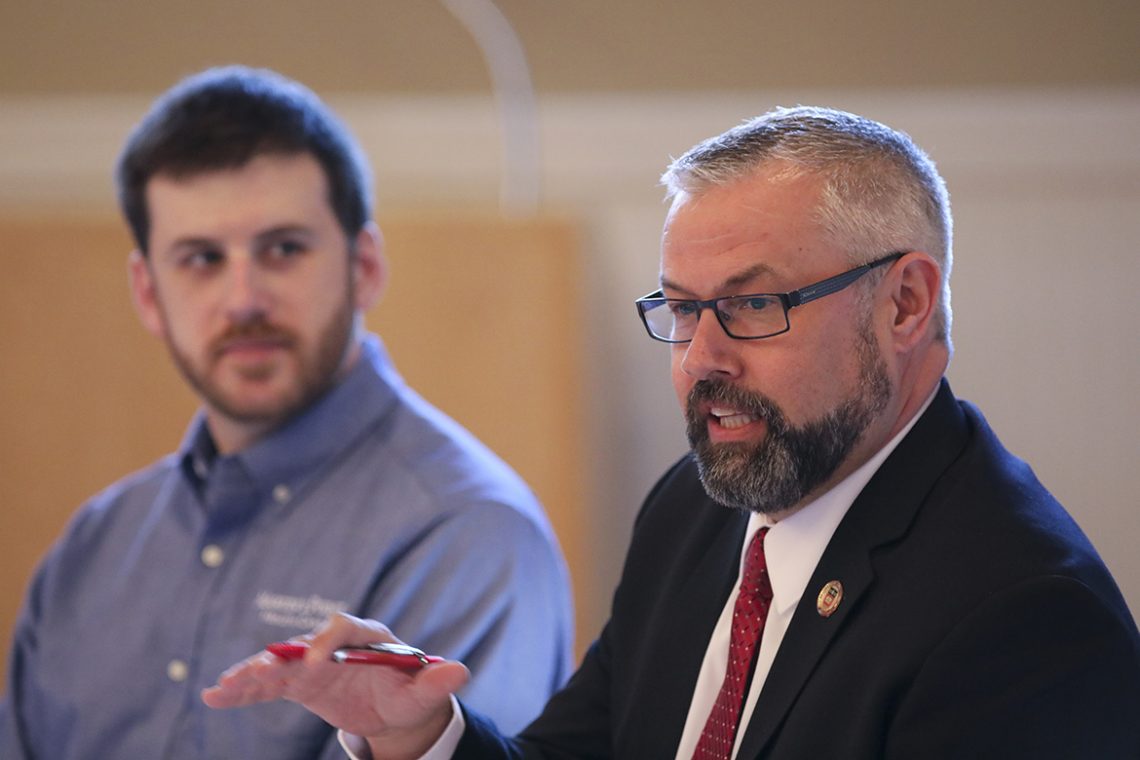 George: “I’m a huge proponent of the liberal arts as well. Walk into your interviews with a certain amount of confidence. Not arrogance, but confidence. You have all gone through an education that has prepared you to be able to think critically. No matter what niche of the job market you’re looking at, the ability to think critically is what a lot of employers want. I have a political science degree, and I work within the business side of education. On the surface, it’s not necessarily a natural fit. The reality is I’m a problem solver at heart. That’s part of my liberal arts education. You should come into any interview with some confidence that you’re going to be able to step up and be able to do what they’re going to ask you to do.”

Maria: “I was an English major, and I remember people saying, ‘What are you going to do with that?’ The truth is, I use my degree every single day at the Finance Authority of Maine. I help review and edit publications and web content for the organization. My primary means of communication is email, and a lot of it is persuasive writing, so I have to be really good at communicating. My liberal arts education has everything to do with my ability to think critically and understand a field that is highly political as well as regulatory.”

On how to set yourself apart — and up for success — in the workplace: 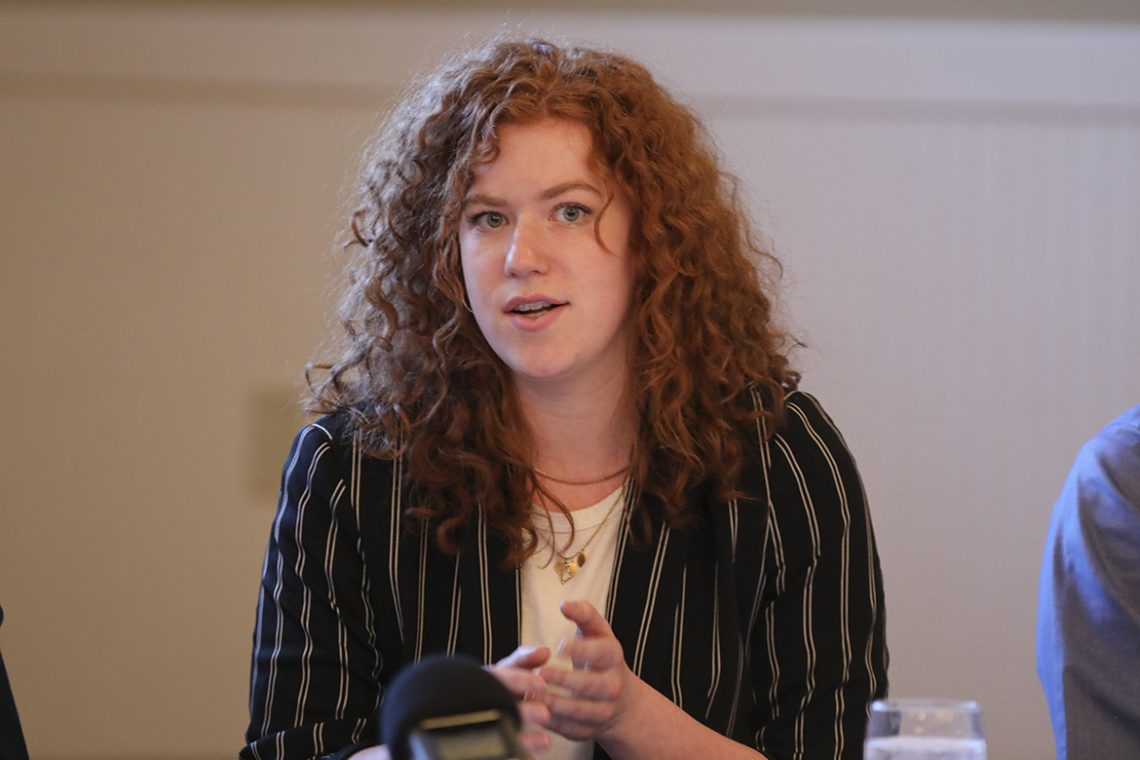 Morgan: “Something that quickly showed my supervisor that I had motivation was that I wasn’t afraid to admit that I didn’t know how to do something. I said, ‘No, I don’t know how to do this, but give me 15 minutes to Google it.’ This doesn’t apply in all cases, but if it’s something as simple as not knowing how to do something with Excel, look it up. I think employers have a lot of respect for people who aren’t afraid to say, ‘I’ll figure it out.’”

Peter: “I would put a plug for being early to work every day. I’m one of two people in my office who is 15 minutes early every single day. We already know everything that has happened since the office closed the day before. It’s amazing. It feels like you start a step ahead of everybody else. And it’s so quiet. Nobody’s calling you, nobody’s dropping in. I get more done in that first 15 minutes than I do from 10 a.m. to noon.” 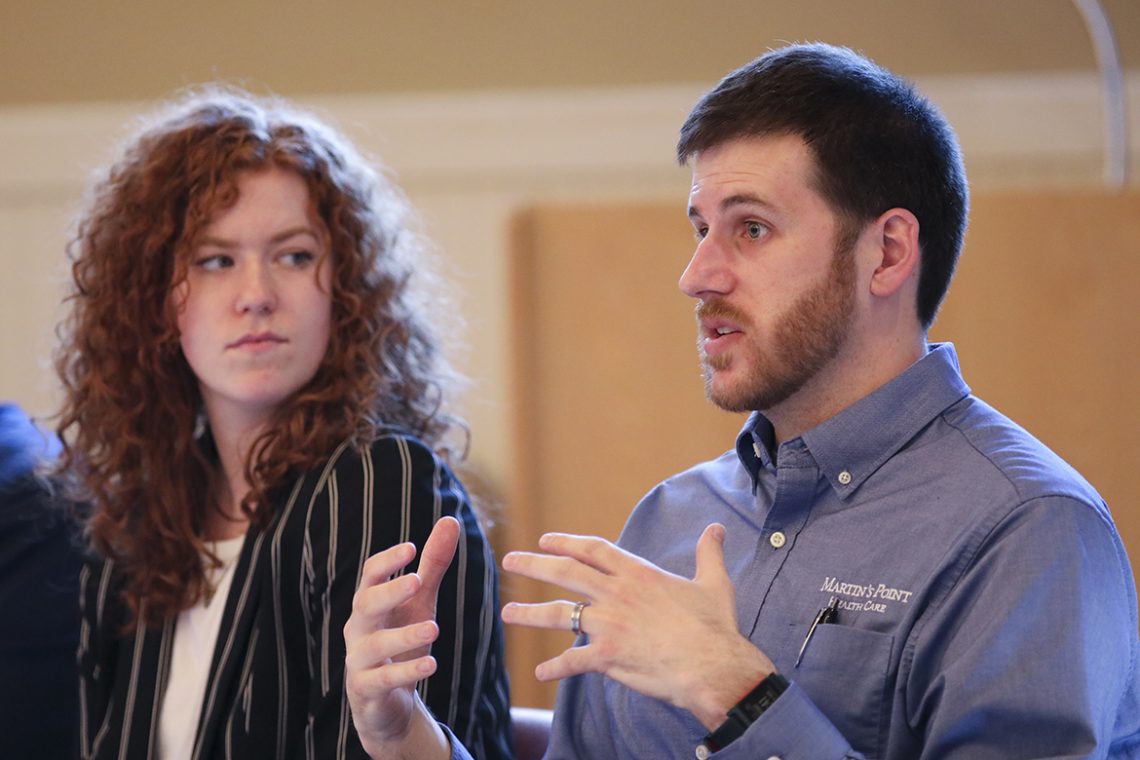 Brian: “The first thing I’d say is have a positive mental attitude. I think a lot of people see being positive as something you either are or you aren’t, but it’s definitely a skill that can be trained and learned. Being positive at work makes life better for everyone involved, and it makes the hard jobs easier. If you’re positive at work, people are going to want to be around you, they’re going to want to work with you, and it’s just going to make your entire working experience much better across the board. The second is to have the willingness to learn and try new things. If you’ve got those two things working for you, you’re going to be light years ahead of most people.” 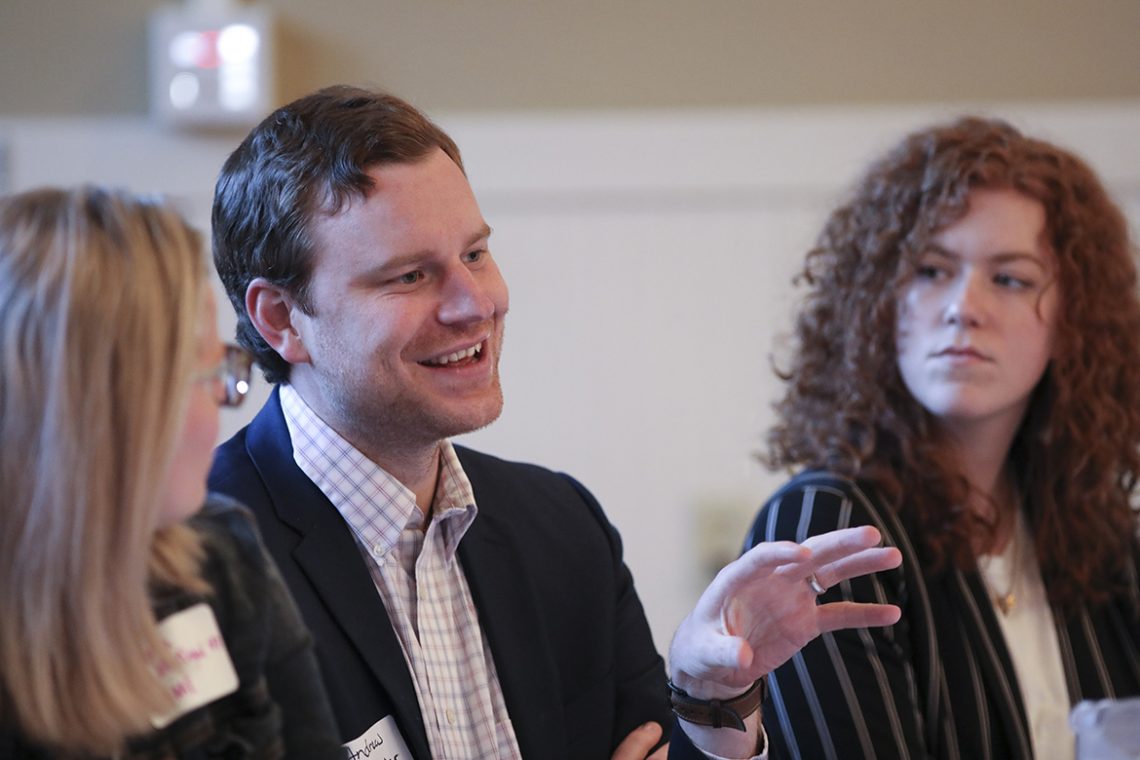 Andrew: “I agree. Be the company person that you should be. Obviously you’re going to have your own job responsibilities, but if there’s ever a time that you have the opportunity to help out with a special project, I would jump into it and show that you’re part of the team and you’re willing to roll up your sleeves. If you’re able to show that you’re willing to take on those small, extra projects, I think that can really separate you for growth and progress in your career.”

On how to set yourself apart in the interview process:

George: “If during the interview you can’t tell me something about my organization, especially in the age of Google, then there’s something wrong. You don’t have to know what an organization’s profit and loss was for last quarter. But you should know some data on what it is that they really do. I’m probably going to be a little overly direct here, but show up prepared for the interview, both physically — like being squared away with appropriate attire — as well as having information about your skills and experiences ready to share. Differentiating yourself isn’t necessarily about having the most pizzazz or the most experience in your resume. It’s about putting everything down that’s relevant and that you can speak to with concrete examples.” 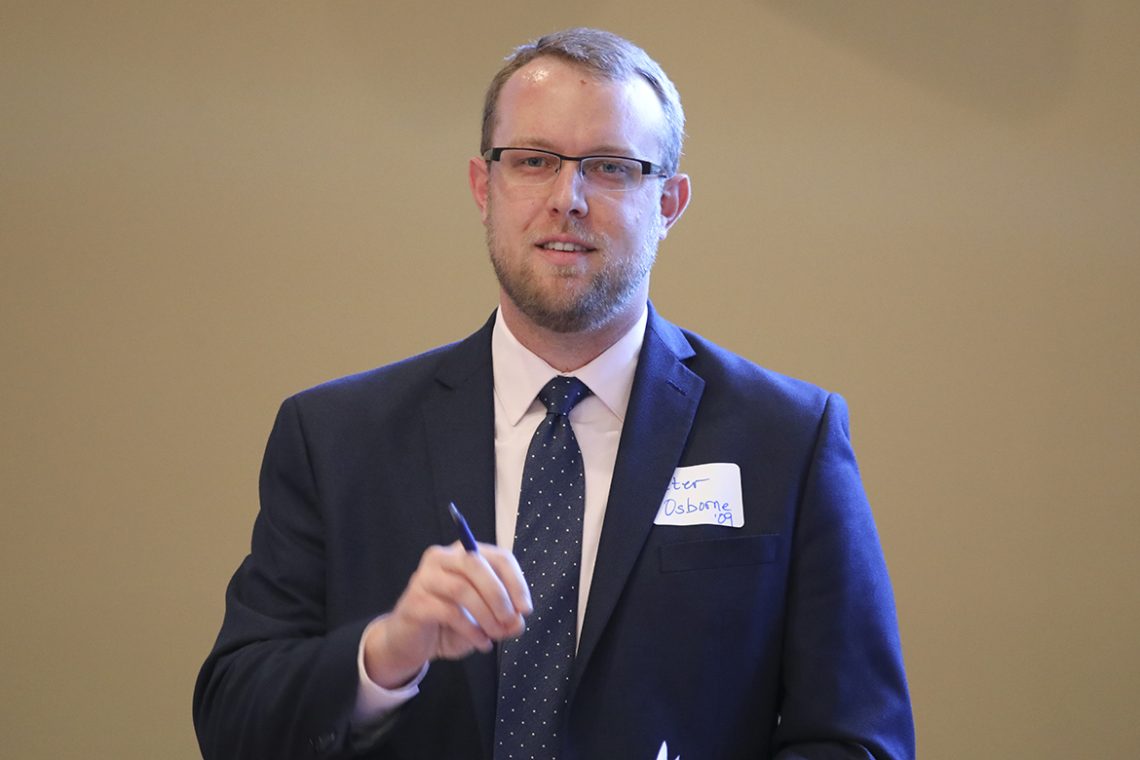 Peter: “I recommend doing a scan of the news in the days leading up to an interview. Last summer we were hiring for someone in our office and we had just undergone a reorganization that was covered by the media. We had a woman interviewing from out of state, and when we got to the end of the phone interview and asked, ‘What questions do you have for us?’ she had an incredibly well-informed, well thought-out question because she had read a news article about the work that we were doing. That just knocked it out of the park for us.” 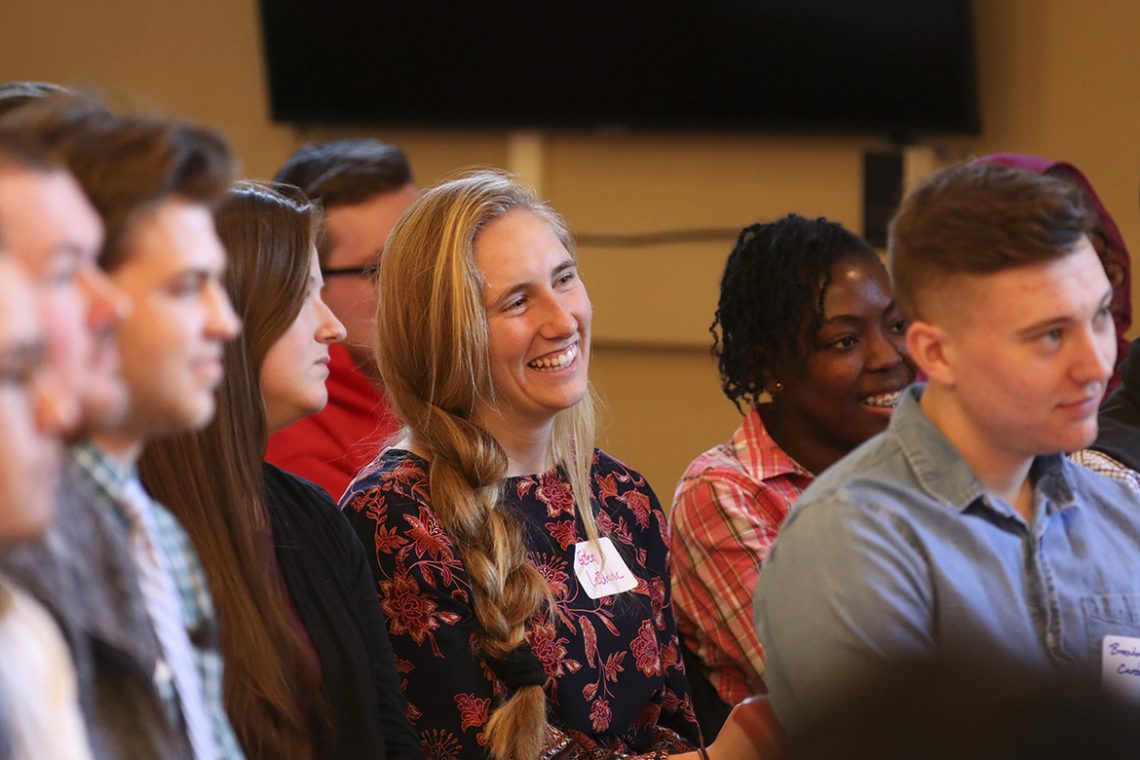 Eden LeBlanc ’20 (center) reacts to a moment of levity during the College to Career Symposium.

As for the students’ perception of the event, junior Business Economics major Eden LeBlanc spoke for many of her peers. “It’s helpful to see alumni come back and talk about their experiences after college and finding jobs. What’s especially encouraging is hearing about the diverse pathways after college, because some of us don’t yet have a clear vision of what we want to do,” said LeBlanc of Dayton, Maine. “What I plan to take to heart is the idea that my first job out of college will not necessarily be my ultimate career. It may take some time to find what I’m really passionate about and want to do.” 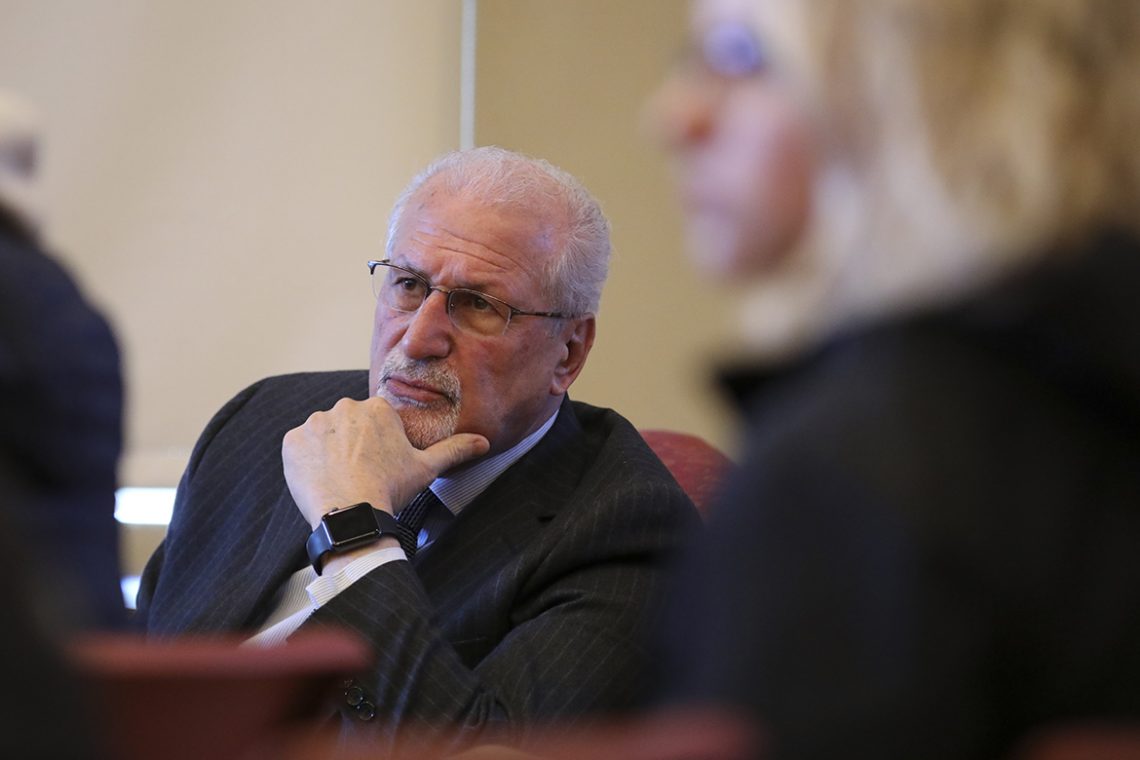 A mainstay of the College to Career Symposium, Professor of Business Waleck Dalpour advises the Center for Student Development on panelist selections and annually encourages his students to attend.

“The participation of our alumni at the College to Career Symposium brings to life the value of a UMF education,” says Waleck Dalpour, professor of business at UMF. “What better motivation for our current students than to hear the success stories straight from the mouths of individuals who were sitting in the same classrooms not long ago? I continue to be grateful to my own former students and those from other majors who help pave the way for the next generation of alumni.”