The Doctor Will See Maine Now

When it comes to the opioid epidemic, Maine’s motto, Dirigo — Latin for “I lead” — has taken on a dubious significance.

In the teen years of the 21st century, the Pine Tree State has had the highest rate of prescription opiate addiction in the nation. Maine also has been among the top-10 states with the highest overdose deaths involving opioids — reaching nearly double the national average per 100,000 persons in 2017.

But the state’s trend lines are improving. Prescriptions for opioids are down, as are hospital admissions for opioid-related overdoses. And after years of increases, the number of drug overdose deaths in Maine is down slightly as well. 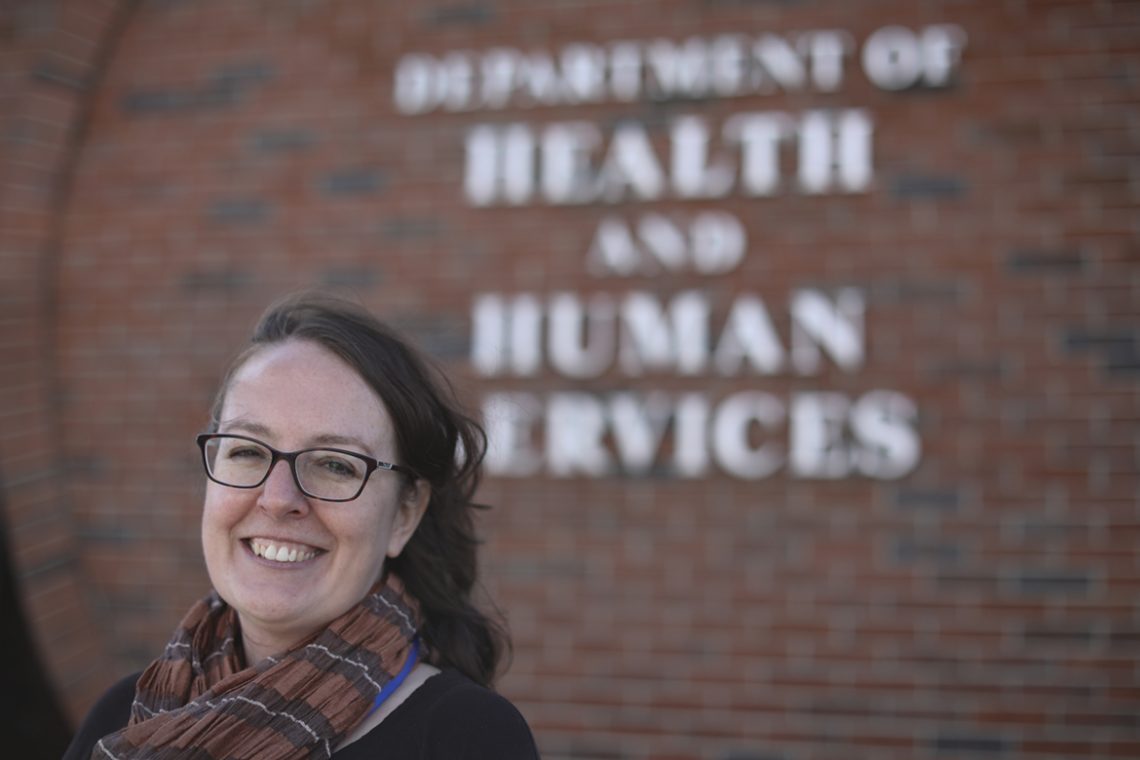 Regarding substance use, Dr. Jessica Pollard ’01 says, “It’s easier to stigmatize something that is amorphous, distant, and unknown. But when you know somebody or when you know a family that’s been affected, it’s harder to maintain those negative attitudes.” (Photo by Marc Glass.)

While some of the issues that gave rise to the opioid crisis in Maine have been mitigated, others persist. Many in the state’s law enforcement and medical communities say access to health care, alternative pain-management strategies, and mental health services remain ongoing challenges for Mainers.

Among those at the leading edge of grappling with the issues related to the opioid epidemic is Dr. Jessica Pollard ’01, whom Maine Governor Janet Mills appointed to direct the State’s Office of Substance Abuse and Mental Health Services in July.

Pollard, who majored in psychology and a self-designed interdisciplinary major combining music and biology at UMF, earned a doctorate in clinical psychology at the University of Connecticut. While pursuing her doctorate, she held a graduate assistantship with Connecticut’s Department of Mental Health and Addiction Services, where she explored alternatives to incarceration for people with mental illness. She later completed a two-year fellowship at Yale University in the Department of Psychiatry, specializing in public mental health and early intervention for psychotic disorders in particular. She also worked at Northern Light Acadia, a psychiatric hospital in Bangor and founded a private practice in Bangor before joining the faculty at Yale University’s School of Medicine.

When she spoke with Farmington First earlier this fall, she was barely two weeks into the new executive role — and still unpacking the components of the job as well as boxes in a new home. Here’s what she had to say about engaging the opioid epidemic in Maine, changing perceptions of the public health crisis, and ways to improve delivery and access to mental health services statewide.

Our citizens’ challenges with opioid use and addiction now have the dubious distinction of being top-of-mind for many Mainers. How has this growing awareness impacted public opinion about the issue?

“Everybody around them is affected when somebody is struggling with a substance use disorder — family members, friends, employers. I think that you would be hard-pressed to find somebody who hasn’t been affected by the opioid crisis. As we know with research into stigma, bias, and discrimination, having direct exposure to somebody is one way of reducing bias and stereotyped attitudes. So, I think because the problem is so widespread and pervasive, it’s harder to maintain those really negative attitudes about substance use when you know somebody dealing with it or impacted by it. It’s much easier to stigmatize something that is amorphous, distant, and unknown. But when you know somebody or when you know a family that’s been affected, it’s harder to maintain those negative attitudes.”

One of the strategies for engaging the opioid crisis is treating addicted people with methadone or suboxone. But communities rarely seem to want clinics in their backyards, so to speak. And sometimes people harbor the belief that overcoming addiction is a function of willpower and that substituting one drug for another isn’t really moving people to a place of being drug-free. How do you view medication-assisted treatment (MAT) of people coping with opioid addiction?

“I think people can take a lot of different paths to recovery. For some people, the abstinence approach is effective. For a lot of people, other kinds of interventions are effective. I think addressing the overall stigma and misunderstanding around medication-assisted treatment is really important because a lot of people see it as replacing one substance for another. But in reality, this is a medication intervention. It’s not about intoxication, and it’s not a substance use.”

“Some people take the position that if a person is receiving medication-assisted treatments — which research supports are effective — that person isn’t actually abstinent and that makes it difficult to include them in treatment programs that require abstinence. And stigma also plays a role for some health-care providers who may not want ‘that kind’ of patient population in their practice.”

“So while we can see that there’s a large number of prescribers who have waivers for medication-assisted treatment in Maine, if you drill down and actually look at how many patients are receiving MAT, it’s much, much less than what you would expect based on the number of waivered providers and number of people who would benefit from this treatment. I think it’s also important to recognize that for health-care providers who are licensed to prescribe medicine, you don’t have to have any sort of special training, qualifications, or certification to prescribe opiates but you do have to have a waiver to prescribe medication-assisted treatment for opiate-use disorder. Physicians are very busy people. It’s hard for them to set aside the amount of time it takes to get the required training and there are challenges in finding waivered prescribers to cover their practice when they take time off.”

“I think it’s well understood that people with serious mental illness are disproportionately more likely to be incarcerated. When our jails and our prisons are full of people who are really struggling with health conditions, that can be very costly on many levels. If the mental health-care system doesn’t support people with behavioral health issues early on, then people may engage in symptom-related behaviors that lead to law enforcement involvement. As a result, our whole public safety system is devoting a lot of time and energy around how to respond. We have a lot of wonderful people in law enforcement in this state who see mental health and substance-use issues through the lens of “this is a medical condition, it’s a health problem” and try to connect people to services rather than just arrest them. I think behavioral health issues require looking at the whole of the scope of the problem and pulling together a response that’s cohesive across systems and symptoms. This includes considering how we help people who are transitioning out of our jails and prisons — how to support them so that when they’re coming out they’re not relapsing or overdosing and dying. Once a person with a history of substance use comes out of incarceration, that’s a high-risk period.”

How do you want to see mental health treatment and services evolve in Maine?

“When people are brought to hospital emergency departments for psychiatric conditions, a high percentage of them are admitted to an inpatient psychiatric facility. That’s probably unnecessary for a lot of people. If you had another intervention point where you could put together a package of care that avoids hospitalization that would be more optimal.”

“We’re not where we need to be with psychiatric urgent care. If you woke up today and you felt like you had the flu or you fell and hurt your arm you could go to an urgent- or acute-care facility. We don’t have that equivalence in behavioral health and we really need it.”

“To me what’s incredibly important is early intervention. I hope, if you were to come back to me when I’ve been on the job a bit longer, that I would be able to talk to you about how we have statewide implementation of early intervention programs. This is an incredibly important investment because if we can start way upstream and say, ‘How do we keep our transition-age youth, our teens and young adults in the early stages of mental illness from progressing into something really debilitating?’ we’ll be so much better off in the long run. People who get early intervention are significantly more likely to be working, in school, out of hospital and jail, and enjoying a higher quality of life.”

Did you always know you wanted to be a clinical psychologist?

“When I went to college, I wanted to be a special education teacher. Hence, UMF was my top choice. One of the many great things about UMF is that in the special education program they give you a field placement to start gaining classroom experience right away. I’m thankful for that because I realized within my first year that the classroom was not a good fit for me. But I was really enjoying the psychology classes I was taking, and I realized that if I earned a doctorate in psychology, then I could influence systems-level changes for children and adults. To gain some practical experience, I worked within some therapeutic foster homes and for an agency for individuals with developmental disabilities, serving kids in different capacities. This helped me decide I wanted to go to graduate school to be a clinical psychologist.”

“What I liked about UMF is that I felt really supported by professors. In addition to the psychology major, I also was doing a lot of coursework in music and in biology, and that became the second interdisciplinary studies major that I was allowed to create, which was wonderful. I got a lot of advising across three different departments at UMF in creating the interdisciplinary major and a lot of help from professors with thinking it through. So with that diversity of academic perspective at UMF, I had a pretty well-rounded graduate school application. The feedback I received at UConn after I started my doctoral program was that I stood out because I put together an interdisciplinary portfolio that included recordings of my musical performances as well as research papers written for my biology and psychology coursework. I think it was pretty innovative of my professors at UMF to help me find a way to pursue all of my interests.”