A Gut Feeling About Drug Addiction

Jason Bubier ’97, a molecular genetics expert at The Jackson Laboratory in Bar Harbor, and his co-investigator, George Weinstock, have received a $4 million grant to explore the genetic basis of substance-use disorder.

You know the old saying about the way to a man’s heart?

Research now underway by Jason Bubier ’97, a molecular genetics expert at the Jackson Laboratory in Bar Harbor, points to a different connection: When it comes to curing or preventing drug addiction, the way to a person’s head may be through the stomach.

The National Institute on Drug Abuse, which recently provided Bubier and his co-investigator, George Weinstock, with a $4 million research grant, thinks so, too. 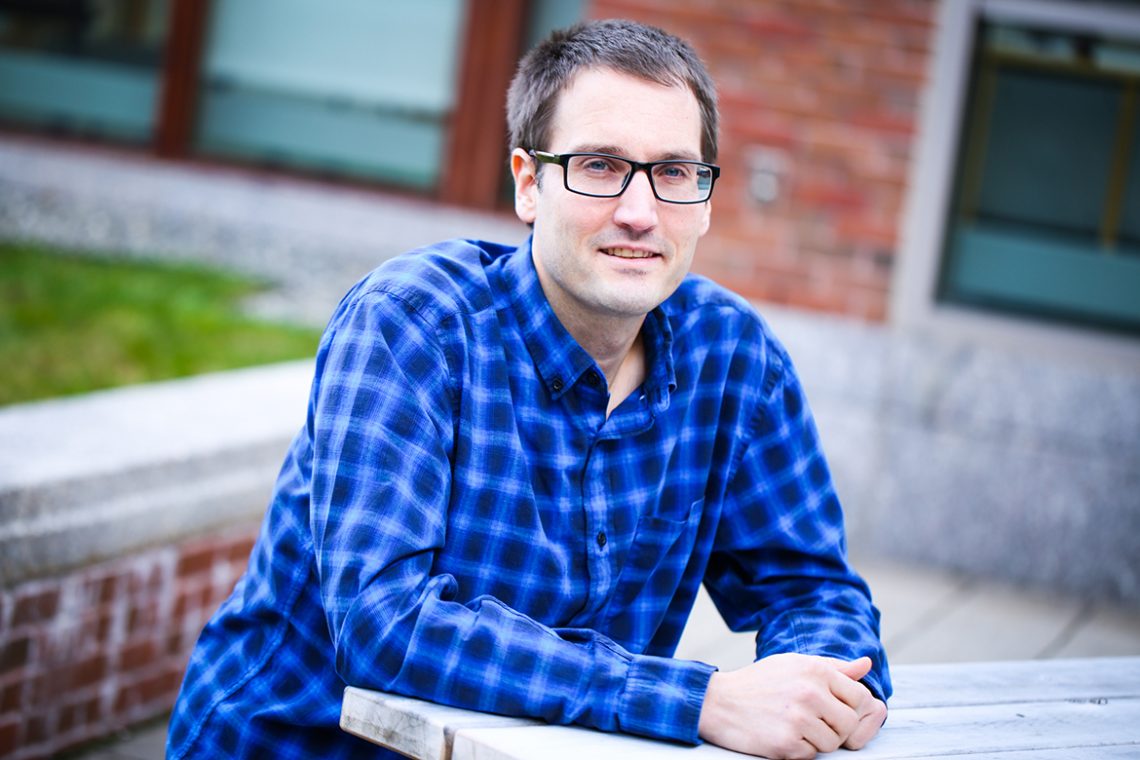 “With any disease I’m studying, helping to cure, treat, or better the lives of people who are suffering has always been a powerful motivation for me,” says Jackson Laboratory research scientist Jason Bubier ’97. (Photo by Tiffany Laufer/The Jackson Laboratory.)

The NIDA-funded study at the Jackson Laboratory will be the first to delineate the genetic basis of drug addiction by exploring the connection between host genetics in mice (their DNA) and their gut microbiome (the colony of bacteria and other microorganisms that live in their digestive tracts).

Here’s a quick primer on the theory: Research now indicates that gut microbiota produce a collection of bacterial metabolites, neuroactive molecules, bioactive compounds, and neurotransmitters, e.g., the chemical messengers like dopamine and serotonin that transmit commands and stimuli across our nervous system. Together these compounds play a significant role in behavioral response to addictive drugs.

Enter genetics: Research shows our DNA can determine which neurotransmitter-producing organisms can thrive in the gut and which are targeted for destruction by the body’s immune system.

“We’re looking at the way that genetics could control your ability to harbor different microbes in the gut,” explains Bubier, who conducts research in the laboratory of Elissa Chesler, Ph.D., at JAX. “If you have a gene that would allow you to be colonized by a microbe it might produce a compound that prevents you from being impulsive — and impulsivity is a risk factor for drug experimentation, problematic use, and increased risk for substance-use disorders.”

Addiction is a disease, says Bubier, not a failure of willpower. “These are important things to reiterate, especially to destigmatize the opioid epidemic.”

Bubier and Weinstock’s research at JAX’s NIDA-funded Center for Systems Neurogenetics of Addiction could one day lead to interventions that would, in essence, inoculate the body against the grip of drug dependency. For now, says Bubier, the science has helped underscore an important point: Addiction is a disease, not a failure of willpower.

“There can be a predisposition for addiction, and it has a strong genetic component,” says Bubier, who majored in biology with minors in mathematics and chemistry at UMF before earning a Ph.D. in biological sciences at Marquette University in Wisconsin. “These are important things to reiterate and make sure people understand, especially to destigmatize the opioid epidemic that’s taking a toll on many people.”

This isn’t Bubier’s first foray into exploring the gut-brain connection. Earlier in his career he researched strains of mice with disrupted sleep patterns and found a link between their DNA and the presence of certain neurotransmitter-producing bacteria.

“Because these mice had this host genetic variant, they were able to harbor a bacteria that inhibited their sleep. How we still don’t know,” he says. “I was able to show that there’s a strong relationship between the presence of a certain microbe and an abnormal sleep pattern. And then if I remove that microbe, I can restore a normal sleep pattern.”

The research, which is available on the preprint biology research server bioRXiv and is out for peer review, supports anecdotal evidence of a connection between bacteria in the human gut and the ability to get a good night’s sleep.

Bubier says that at some conferences where his research has been presented clinicians in the audience have reported that their patients, especially older adults, have enjoyed better sleep when they’re on an antibiotic regime. While this may lend credence to a link between the gut biome and sleep, taking broad-spectrum antibiotics to promote better slumber isn’t a viable solution.

Instead, says Bubier, “It would be great to determine exactly what the microbe is producing and then take just that, rather than changing the whole microbiome composition. There are studies that can be done to detect which metabolites are being produced in mice and then inoculate them with those metabolites to see if they inhibit sleep or alter the rhythm.”

Bubier says his interest in exploring possible links between the gut biome and neurobehavioral issues was inspired by a chance encounter with the mother of a child with Obsessive Compulsive Disorder at a research conference.

The woman, Beth Alison Maloney, happened to be the author of Saving Sammy: A Mother’s Fight to Cure Her Son’s OCD. The book offers an account of how Maloney’s son contracted Pediatric Autoimmune Neuropsychiatric Disorder Associated with Streptococcal (PANDAS) infection and her efforts to reclaim Sammy from the disease.

PANDAS occurs when a child’s immune system produces antibodies, which, instead of fighting an infection, mistakenly attack healthy brain tissue. Bubier, who still carries Maloney’s business card in his wallet, says talking with her and coming to understand the implications of the disturbance in her son’s microbiome had a profound influence.

“It made me really interested in the idea that the microbiome can have effects on the brain,” he says. “We may not fully understand it, but it’s becoming more and more clear.”

Bubier may spend the bulk of his days scrutinizing large-scale studies of genomes and their functions, but the potential impact of his research on people — and the fierce urgency of drug addiction in America — aren’t far from his thoughts.

“The opioid epidemic is alive and well in New England,” he says. “It hits home quickly. With any disease I’m studying, helping to cure, treat, or better the lives of people who are suffering has always been a powerful motivation for me.”